In August it was Susan’s turn and her colour choices were white/blue, white/red or a combination of both. I opted for two white/blue and one white/red block. Finding blue fabrics in my stash is no problem, I love blue. However, I don’t use red very often as I find it can easily dominate over other colours in a quilt and as a result I don’t have a lot of reds in my stash.

For my first block I started by making flying geese units and sewed them into three strips with alternating light and dark blue triangles. The strips were pieced together to make a block and white fabric was added around it to create an off-set look. 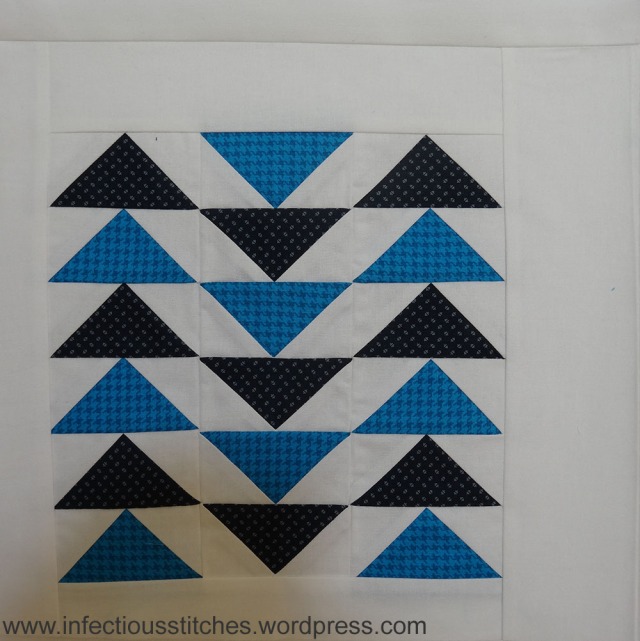 For my second block I pieced some light and dark blue fabrics into short strips and started playing on my design wall. This is the layout that I came up with and I added white fabric to fill in the gaps between the strips and the edges. It reminds me of a windmill. This is my favourite of the three.

I was starting to run out of time, so for my last block I decided to do another log cabin as these are fairly quick to assemble. Instead of a wonky one I made a rectangular log cabin in a square, if that makes any sense? I think it is quite striking.

The blocks that were made by the other participants can be found on the F2F page, scroll down until you reach August.

My name is Emmely and I am a sewing enthusiast from the Netherlands. Sewing is my creative outlet and I use it as a way to relax. I make a lot of my own clothes. I also quilt and make bags and pillows, for which I make my own patterns. On my blog I share my sewing adventures and provide sewing tutorials. I hope to infect as many people as possible with my love for sewing.