In December I participated in a winter swap organized by the dutchMQG. We each had to prepare 12 gifts for another member and some of the gifts had to be handmade. They were opened in the 12 days preceding Christmas and it was a lot of fun to see what everyone received. I had to make something for Ingrid and she loves blue and plus blocks so to combine those two in an item was a given. Each quarter we also have a specific theme at our guild and at the time it was curves, so I also wanted to include some curved piecing

For my final gift I made a quilted drawstring bag. I first sewed 9 improv curvy cross blocks to create a panel for the front of the bag. This was framed in a dark blue solid fabric to make it large enough. For the back panel I used a single piece of the same dark blue solid. The front was quilted in the ditch and on the back I quilted one large curvy cross.

The front and back panels were sewn together and the corners at the bottom were boxed so that the bag can stand up on its own. I did not use a separate lining. For the sides I used French seams and for the corners the seams were bound with a strip of fabric because the layers just got too thick for French seams.

For the closure at the top I used a single layer of the dark blue solid because that would make it easier to close the bag than when you have to pull a quilted layer together. The top was folded over to create the channel for the drawstring. It was attached to the main piece and again I used some binding to cover the seam.

I dug through my collection of saved ribbons for something suitable to use for the drawstring and found this nice off white piece that was just long enough. I am very pleased with how this bag turned out!

My first newsletter goes out on Saturday so if you don’t want to miss it there is still time to sign up here! I will share a personal story of how I came to be where I am now and what my plans are for the near future.

I came across the Sorbetto from Colette patterns while searching for a top that I would be able to squeeze out of a 60 cm long piece of fabric. The Sorbetto seemed to fit the bill perfectly as there are not too many details that take up precious fabric.

I first made a muslin in size 6 and from the waist down I blended to in between size 8 and 10 at the hem because I thought my pear shape would need it. When trying it on I decided that this definitely created too much flare at the hem (the pattern itself already has quite a bit of flare) so I changed it back to size 6. The only thing I changed was to remove ½’’ at centre back. The muslin also proved to be good practice for the construction because in my muslin the pleat ended up on the inside…

The main fabric is a 100% extra combed shirting cotton from Tessitura Monti that I had left-over after making a classic tailored shirt for my brother. The cutting instructions for the Sorbetto tell you to fold the fabric once and then to cut both pattern pieces on the same fold. My fabric was 160cm wide and by creating two fold lines by lining up the selvages I had more than enough room to cut out both pieces from a piece of fabric that was a little over 60 cm instead of the 1.5 yard that is called for in the instructions. So, for the smaller sizes you can definitely make this top with less fabric!

Unfortunately, I did not have enough fabric left to make my own bias tape. I intended to use store bought bias tape from my stash, but when I held it next to my good quality fabric it looked extremely cheap so that idea went out of the window.

Just look at that edge stitching!

Instead, I chose to use a quilting cotton from the Desert Daydreams collection of Anthology Fabrics to make my own bias tape with. Because the print is small scale it is clearly visible on the ½’’ bias tape and I feel this adds a nice detail to the top. I am also really happy with how my edge stitching on the bias tape turned out, it is probably the best I have done up until now. 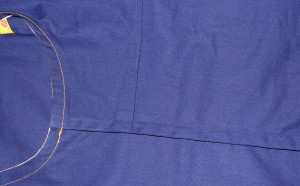 French seam on the inside of the top.

I am rather pleased with the fit, although if I were to make this top again I think I would lower the armholes a little since they are just a bit too tight. For the shoulder and side seams I used French seams. In Dutch, funnily enough, a French seam is called an English seam, which makes me wonder what it is called in French… These seams make the inside of the garment look much tidier and with this top there are only 4 seams that require finishing so it doesn’t even take that much longer to complete the garment.

Overall I am happy with how this top turned out. In the future I will definitely try another Colette pattern as I thought the PDF pattern was easy to assemble and the instructions were very clear.

My name is Emmely and I am a sewing enthusiast from the Netherlands. Sewing is my creative outlet and I use it as a way to relax. I am currently mostly sewing quilts, bags and pillows for which I also create patterns. On my blog I share my sewing adventures and provide sewing tutorials. I hope to infect as many people as possible with my love for sewing.